RULE OF THE WEEK

This one is simple. A player seeks to delay the game by deliberately flicking the puck out of bounds. Usually this happens when a team is under pressure and needs a break in play to organize themselves. Or, they have players in the bin and they seek to minimize playing time while they are short of numbers. The other aspect of this rule is when a player deliberately deflects a flick out of bounds. The decision you must make as a referee is, was the flick or deflection deliberate. Only you can make that decision but it is usually obvious.

When I say "manage", it is crucial referees communicate their signals clearly, and ensure the specified penalties are imposed. If the timing system allows and it’s in the last 2 minutes of a game, a quick look at the game clock to check that game time has been paused or, if not, consider calling a refs time out, in order to negate any time wasting while the teams reset for an advantage puck or look to waste time while they have players in the sin bin.

If this all seems a bit intimidating, then relax. This is not a common infringement but if you do encounter it you will now know what you are seeing and what to do when you see it. I hope! If you can’t follow my meandering explanation please let me know. I’ll try and turn my explanation into a flow chart or, something.

Stay well and remember - Regardless of what you think of the call, live with it, keep quiet and move on.
Regards, Dave Hilder (TUHA Chief Ref)
Delay of Game - Part 1

This infringement is usually seen when a team holds the puck in one of the corners (The corner rule) or by deliberately flicking the puck out of bounds. These rules are an attempt to remove an unfair advantage which may be gained by using the rules and court boundaries to waste playing time.
“The corner rule” comes into effect when the puck is deliberately held in the corner by 2 players from the same team in succession. What does that mean? I hear you ask. Well, firstly.....

16.2.2.1 If two members of the same team hold the puck in a corner in succession with neither player making an obvious attempt to manoeuvre the puck out of the corner OR a player from the opposing team taking possession of the puck, the Referee will stop play and award an advantage puck to the non-offending team.  The offending team shall receive a caution (1st infringement) and for all subsequent infringements the second player to hold the puck in the corner shall have a 1-minute time penalty awarded against them.
Let me try to talk you through it.

Also, if at any time, white gets possession, even for a second, then the rule resets. I mean possession not just a touch.
Why does this matter? If a team can hold the puck in the corner then good luck to them. I hear you say.

If a player is holding the puck in the corner, they can adopt a position which makes it impossible for an opposing player to legally take possession of the puck without committing a barging and/or stick infringement. Remember first contact must always be the puck. In this case, white cannot legally push black off the puck or reach in and hook the puck out. It just can’t be done. So, in a worst case scenario, a team can play for a draw by holding the puck in the corner for a whole match. This rule is an attempt to prevent this from happening.
I think that’s enough for now. I’ll run through the rest next time.

Stay safe, I’ll see you at the pool soon and Regardless of what you think of the call, live with it, keep quiet and move on.

​Note: The relevant "The Rule Book" video (see link below) was released at the time of the 5th World Age Group CMAS Underwater Hockey Championships in Sheffield, England, in August 2019.​​ 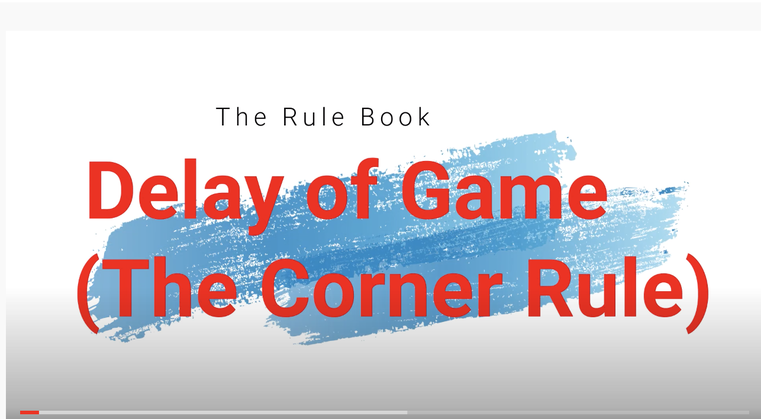 Illegal Use of Free Arm

Well, we’ve all been “free armed” and most of us have been penalised for using it. But what is a “free arm”? Simply, it is using your free arm to gain an unfair advantage. Your free arm is the arm not holding a stick, of course. Your free arm can be used intentionally to gain an advantage by holding, pushing or pulling an opposition player.  We all use our free arms during play to turn, manoeuvre and to desperately pull ourselves through the water but just because we’re flailing our arm around and we contact another player we have not necessarily “illegally used our free arm”. What was the intent of the arm ‘flailer’ and did they gain an unfair advantage? Or, was another player unfairly disadvantaged?  If the answer to any of those questions is yes, then stop the game and award an advantage puck to the dis-advantagee. (strangely, spellcheck doesn’t recognise this word :-). Assessing the player’s intent is very important when making decisions as a referee in all sports. The video clearly demonstrates the intent of the offending player. In both cases, they certainly meant to use their free arm to gain an advantage. Intent can be described as “what was the players intention?”. Did they mean to do it, as in the video or was it an accident? I will post some guidance on intent and advantage down the track. And if you see anything as blatant as the video, then throw them out; for 2 min at least maybe for 5min in A grade.

​Don’t forget, as always - Regardless of what you think of the call, live with it, keep quiet and move on.
I hope you are staying well and hopefully the pool will reopen soon.

​Note: The relevant "The Rule Book" video (see link below) was released at the time of the 5th World Age Group CMAS Underwater Hockey Championships in Sheffield, England, in August 2019.​ 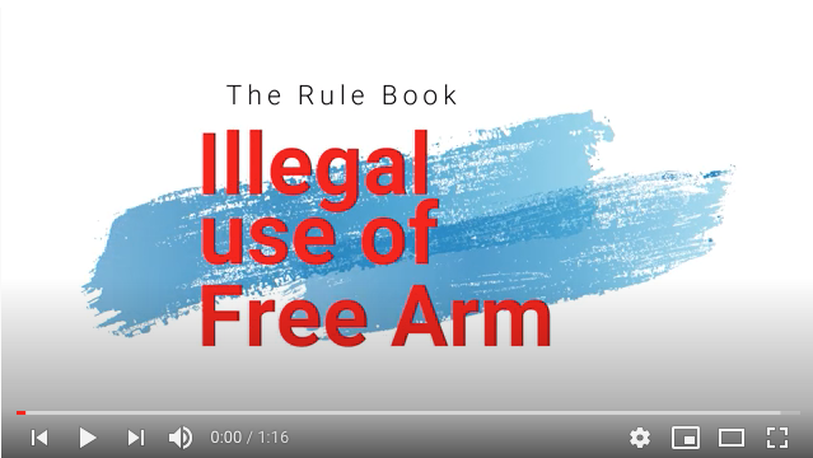 This week we are looking at Holding the Barrier/Wall/Goal. This one is pretty straight forward and most of you will be familiar with it already. You cannot grip the wall/barrier or goal with your hand (or anything else for that matter). It is okay to put your hand flat on the wall or goal to help hold your position or to push off but you are not allowed to grip it. This may seem a bit pernickety but the point of this is, by gripping the wall you can hold yourself in position and thereby gain an advantage. This rule, like many of the rules in underwater hockey, is all about preventing someone gaining an unfair advantage. You can use your fins, strength and skills to manoeuvre, drive and position yourself but you can not hang on to a piece of the equipment i.e. the wall, barrier or goal, to achieve an advantage by pulling yourself along or holding you in a position which may be of advantage to you over the opposing players. It’s such a little thing but it makes a big difference.
​
Even though we are not able to get in the water, make sure that you are doing something to maintain your physical and mental health and well being.

And remember - Regardless of what you think of the call, live with it, keep quiet and move on.

Note: The relevant "The Rule Book" video (see link below) was released at the time of the 5th World Age Group CMAS Underwater Hockey Championships in Sheffield, England, in August 2019. 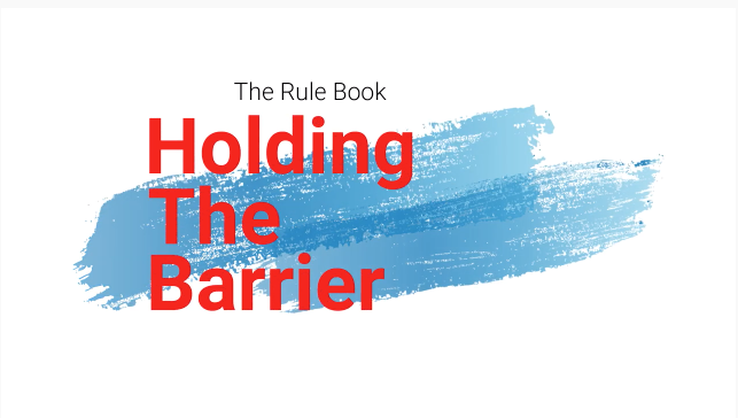 Even though our uw-hockey is currently 'on hold', it doesn't mean we can't continue to think about our wonderful sport!
TUHA Chief Ref Dave has provided another in the Rule Of The Week series: ILLEGALLY STOPPING THE PUCK.

Hello All,
This week’s video (https://www.youtube.com/watch…) shows the most commonly seen variation of “Illegally stopping the puck” AKA. The illegal knockdown. Infringement 16.3.5 Advancing or attempting to play the puck with anything other than the playing area of the stick.

In the video, the infringing player attempts to intercept the flick. While I’m sure he would have liked to catch the puck on his stick, unfortunately, he catches the puck on his hand. This is illegally stopping the puck. The most important consideration is the actions of the 2 players involved. The flicker has tried to get the puck past the flickee. The flickee has moved a part of his body in order to stop the puck and it is this deliberate action and resulting contact with his body, which determines that this is an infringement. Often a player will be reaching out to make a tackle and the puck carrier, in an attempt to get rid of the puck, will flick the puck into the opposition player. This would not be illegally stopping the puck as the defender has not moved his hand into the path of the puck but rather, the puck carrier has flicked it into the defender’s hand, all be it, accidentally, usually.

Note: The "The Rule Book" videos were released at the time of the 5th World Age Group CMAS Underwater Hockey Championships in Sheffield, England, in August 2019. 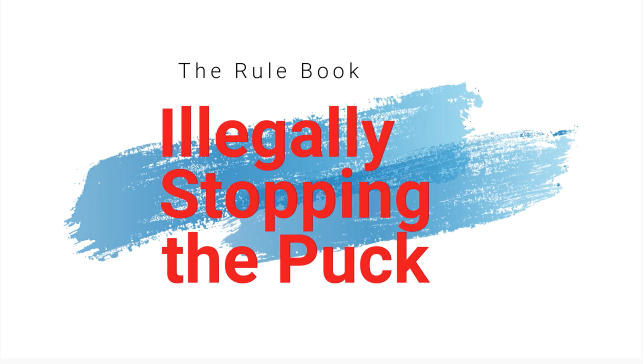 AKA "Hacking", this weeks video (from the series made for the Sheffield 2019 Age Group Championships) shows several examples of stick infringements. While you may be familiar with the contact of the stick on another player usually in the act of tackling or competing for the puck, you may not be familiar with a stick pushing the stick of a team mate in order to advance the puck. This is most often seen on the goal tray and can committed by either defenders or attackers.
Stick infringements are best considered in terms of 'first contact'. First contact must always be the puck regardless of which side you or the puck carrier are on.
If you have any questions please ask any of the Guild Refs.

Sometimes subtle but often not, this is the infringement we all hate the most and the one that players most often commit. Attached below is one of a series of videos from the 2019 Age Group World Championships (held in Sheffield), which demonstrates several, but by no means all, examples of obstructions and barging.
I hope it clarifies the reason for making the calls and helps you when you are faced with similar situations.
Tassie has some of the best Underwater Water Hockey players in the world and also some of the best Underwater Hockey referees in the world. Referees who regularly ref at national and international competitions also ref us every Wednesday night. If you have any reffing queries please ask any of our guild refs. 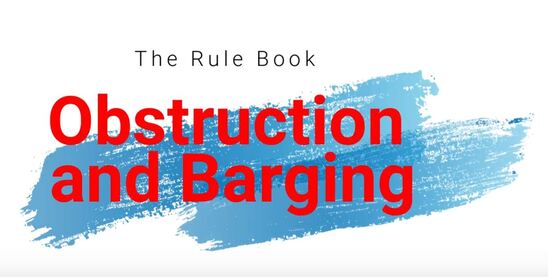